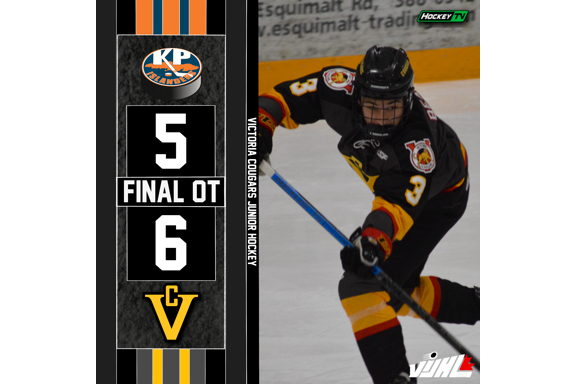 Logan Walker managed to score just seconds into the game on a squeeker that Jonah Chambers still can’t find, followed by the Cougars scoring 4 straight to round out the 1st. Kieran Strange, Dylan Franklin, Ty Brant, and Jaxon Danilec. The latter has scored 3 goals in his first 2 games as a Cougars. If he keeps that up he will be a solid difference maker come playoffs.

The Islanders flipped the script for the final 40 minutes. Reid Fitzpatrick scored just seconds into the 2nd and that stood as the lone goal for the middle frame. But the final period was all Islanders for the most part. Kellan Bates and Mateo Sjoberg scored early for KPI with Jaxon Danilec getting his 2nd of the game just minutes later. Bates scored once again with the goalie pulled and the pressure cranked to 11.

Dylan Franklin was the hero, though. 3:22 into Overtime Franklin scored his 2nd of the game. Unlike the last game the Cougars managed to get the 2nd point, but they cannot keep this up or the playoffs will be short, because it’s likely Kerry Park and Victoria will be first round opponents.

The Cougars take on Campbell River Sunday for the only contest of the season between the top 2 teams in the league.

330pm on Hockey TV from Victoria.